Granular materials like sandy and gravely soils are composed of an assembly of individual particles. A given soil deposit or specimen has a specific arrangement of individual particles, clumps of particles, and void spaces. This spatial arrangement, along with the orientation of interparticle contacts, encompasses the basis of the soil fabric concept. Experimentally soil, fabric can be quantified by non-destructive methods such as image microscopy and X-ray computed tomography. While these state-of-the-art methods provide accurate and useful information, they require specialized equipment and analysis methods. This has ushered a rapid increase in the use of particle-based numerical tools, such as the Discrete Element Method (DEM), which enable the study of behaviors at the micromechanical- and element-scales.

In initial stage of this project, I used 2D discrete element method, to observe the stress based anisotropy using the evolution of contact normals, contact normal forces and contact shear forces, under isotropic and oedometric compression. These parameters were further bifurcated into two sections, namely the strong force network and the weak force network, depending on the magnitude of force carried by the force chain. Fabric anisotropy is computed by, a) Fabric Tensor evolutions, and, b) angular distribution of various vectorial representations. An equivalence between these two is observed and presented. The results indicate that the strong force network orients itself towards the major principle plane, and the weak force network orients in a perpendicular direction to strong force effectively providing lateral support to the buckling of these strong force columns.

The results and the codes developed from this study are used in the fabrication of a multi-bender test setup for experimental quantification of fabric and development of 3D DEM codes for fabric quantification. 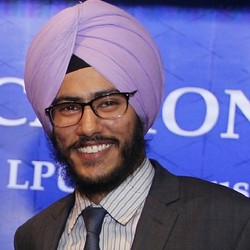